Saudi Arabia and the UAE: When crown princes fall out 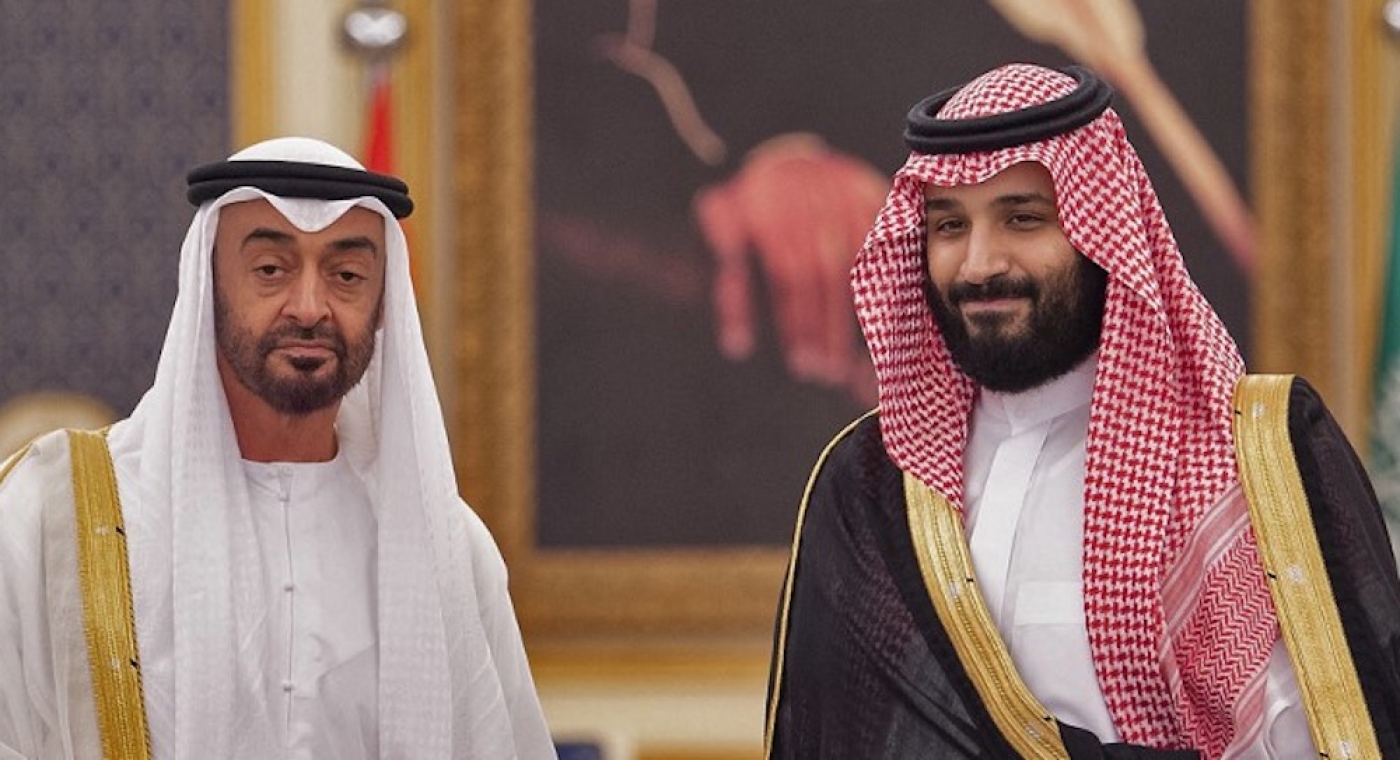 They were the Gulf power couple of the Trump era: the two crown princes and de facto rulers of the UAE and Saudi Arabia shook up the region, imposing their will on their neighbours.

Ever since Abu Dhabi strongman Mohammed bin Zayed (MBZ) took Mohammed bin Salman (MBS) under his wing in 2015, the latter did not seem bothered at being framed as the former’s protege. The notion in Riyadh was that Abu Dhabi’s model of authoritarian liberalisation could be one to emulate, bringing the kingdom from the Middle Ages into the 21st century.

As MBS now sits more firmly in the driver’s seat in Riyadh, the honeymoon period between the crown princes is certainly over

But over the past two years, it has dawned on MBS’s inner circle that the assumed ally next door was not interested in creating win-win situations for both states. Rather, the UAE’s assertive zero-sum mentality – emboldened by former US President Donald Trump’s laissez-faire Middle East policy – often came at the expense of Saudi interests.

The rise of the UAE as arguably the most powerful Arab state over the past decade has only been possible because Abu Dhabi ruthlessly pursues its own interests, with little regard for Riyadh’s reputational struggle in Washington, security concerns in Yemen, urgent need for economic diversification and existential dependence on stable oil prices.

Since 2019, the growing divergence of interests between the two neighbours has created serious cracks in the thin veneer of their once-hailed “strategic entente”. The relationship between Riyadh and Abu Dhabi in recent years has been underwritten by ideological synergies over the UAE’s grand strategic counterrevolutionary narratives, including securitising political Islam, the Muslim Brotherhood and civil society more widely.

While these synergies remain, the other factor that has traditionally sustained this bilateral relationship – the personal ties between MBZ and MBS – has suffered, as the leader-to-leader relationship has noticeably cooled since the election of US President Joe Biden.

While the two leaders previously cemented their “bromance” with joint hunting trips, official state visits and phone calls, according to press releases, MBS and MBZ have spoken only once since the Trump era came to an end. It became clear that under Biden, Washington would withdraw its carte blanche for Riyadh and Abu Dhabi to do as they pleased in the region. Both needed to buy credit with the new administration and the Democrats in Washington.

Instead of featuring as the bullies in the region, both MBS and MBZ needed to reframe their image as more constructive players, eager to support the Biden administration’s soft-handed regional policy of leading from behind.

When Trump got elected in 2016, MBZ personally visited the Trump team in New York, lobbying for his protege MBS as the next king. Four years later, with a Democrat elected president, the UAE is noticeably trying to create distance between itself and the Saudi leadership. Any affiliation with MBS is seen as potentially tainting Emirati efforts to turn the country’s image around.

Under pressure for its joint ventures with Moscow in Libya, its mercenary adventures in Yemen, and its rise as a force multiplier for China’s global information power, Abu Dhabi has demonstrated that its zero-sum mentality means it is willing to throw a “strategic ally” under the bus.

The war in Yemen, which the UAE helped to frame as “Saudi-led”, was the first arena in which the Saudi leadership learned that Emirati policy was ruthless when it came to preserving the UAE’s interests, even at the expense of Saudi Arabia.

Some in MBS’s circles have, according to sources close to the palace, raised concerns that MBZ might have pushed Saudi Arabia into risky adventures in order to create a shield behind which the UAE could consolidate its gains in Yemen’s south.

While Saudi Arabia had to bear the operational and reputational burdens of the costly war against the Houthis, Abu Dhabi secured its foothold along Yemen’s strategically important coastline via its surrogate, the Southern Transitional Council.

Left out in the cold

The UAE’s comet-like rise amid the regional power vacuum left by a disengaging US created the illusion in Abu Dhabi that, as the new middle power in the Gulf, it would not need to yield to anyone. The ongoing standoff between the UAE and Saudi Arabia within the Organization of the Petroleum Exporting Countries (OPEC) shows that Abu Dhabi is confident to stand its ground.

The UAE will not compromise on national interests, even if it comes to the detriment of Saudi Arabia, as with Abu Dhabi’s blatant ignoring of OPEC output quotas.

On the issue of the Qatar blockade, where MBZ led and MBS willingly followed, the UAE showed very little willingness to compromise. Although the reputational and political costs of the ongoing blockade continued to rise for both – especially in Washington – Abu Dhabi was willing to sustain it in the interests of its counterrevolutionary crusade. 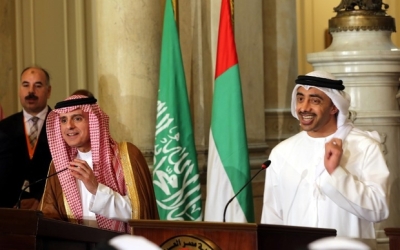 In the end, Saudi Arabia broke ranks and let pragmatism prevail. Ending the blockade was a first sign of Saudi leadership in the Gulf under MBS, which Riyadh viewed as a win-win opportunity for the blockading quartet and for Qatar. Abu Dhabi, on the other hand, was deeply concerned about the pace and depth of normalisation, which not only pressured the Emiratis to fall in line, but allowed MBS to reap the positive messages.

This was just the beginning. Left out in the cold time and again by its neighbour, Saudi Arabia has since embarked on its own more assertive strategy for diversification. The kingdom’s new economic policies, aiming to attract investments from multinationals based in the UAE, directly target the success story of Dubai, which has been in economic limbo since the start of the Covid-19 pandemic.

The unhealthy nature of this competition means that it becomes ever-more difficult to create win-win situations. And as MBS now sits more firmly in the driver’s seat in Riyadh, the honeymoon period between the crown princes is certainly over.

As the gloves come off, MBS is eager to show that Abu Dhabi has been punching above its weight, and that there are limits to smart power in compensating for lack of size. Nonetheless, their relations remain underwritten by ideological synergies over fears of political Islam, the Muslim Brotherhood and civil society. It remains to be seen whether this is enough to prevent another Gulf crisis.

The views expressed in this article belong to the author and do not necessarily reflect the editorial policy of Middle East Eye.

Andreas Krieg
Dr. Andreas Krieg is an assistant professor at the Defence Studies Department of King’s College London and a strategic risk consultant working for governmental and commercial clients in the Middle East. He recently published a book called ‘Socio-political order and security in the Arab World’.

What the UAE takeover of Yemen’s islands really means Far from withdrawing from the war in Yemen, the Emirates is pursuing a hard-line and establishing itself as a military power for the long haul.June 14, 2021 By.Arwa Mokdad

The French Geostragical Intersts in the Horn of Africa: The Red sea , Djibouti and Somalia. By Dr. Bischara Ali EGAL; janauary10, 2021

Writing “Israel” In Quotation Marks Is A Peaceful Form Of Pro-Semitic Protest By Andrew Korybko October 26, 2017 Updated: May 8, 2019

Turkey and China: an Alliance to Conquer the World – I by Prof. megalommatis muhammad shamsaddin , feb.1, 2021